This weekend our gung-ho posse of unmotivated ESL teachers took a trip down the West coast to Boryeong, to see the two-week extravaganza that is MudFest.
I personally had no idea what to expect, but I’d heard that MudFest is popular with Americans so I had a sneaking suspicion the type of atmosphere we could expect, which was confirmed very promptly and we arrived to see people staggering down the road, beer in hand, screaming “MudFest!!” at the top of their lungs. We even saw one guy with a Fraternity tattoo, which I wasn’t even aware existed outside the realms of film.
Before departing, the volume and questionable sanity of the emails we were receiving from our organiser had us all a bit concerned, but once we arrived the depth of her incompetence became readily apparent. We were directed to a huddle of 150 or so impatient westerners, all surrounding this one woman who at that time was screaming down the phone at somebody. Her ticketing system had fallen apart the previous night when she appeared to have had a nervous breakdown, and now she was having to assign rooms on an ad-hoc basis, which as you can imagine was chaos.

We took the initiative and cornered one of her helpers, who told us which hotel we were in, so off we went, and after some more pointless shenanigans with the hotel reception we dumped our stuff and headed out into the muddy unknown. 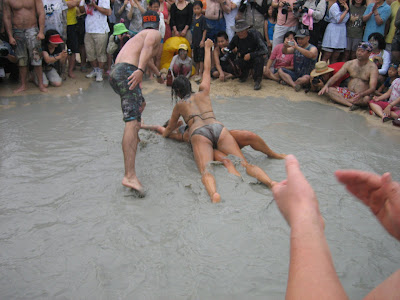 Womens mud-wrestling – not nearly as violent as it sounds

Once we hit the main square the glory of MudFest was driven home – this wasn’t just some drunk westerners getting muddy, this was every drunk westerner getting muddy, at least the same amount of Koreans, and hundreds upon hundreds of photographers nervously trying to take pictures while keeping their expensive cameras mud-free. The volume of photographers sort of worried me, as in our first 15 minutes there we saw a girls wrestling match take a turn for the sexy when one of the girls bikinis was ripped off, and westerners already have a hard enough time of it with our reputation for promiscuity without pictures of naked western girls being circulated to every concerned mother on the Korean peninsula. 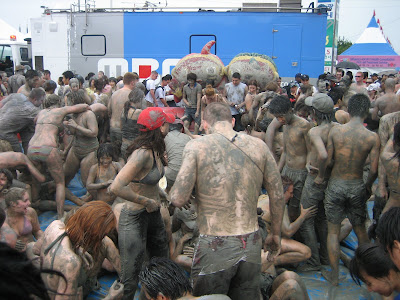 Luckily there was enough mud to go round
Thankfully I don’t think those pictures will be going very far as the victim of aforementioned bikini-based atrocity was slightly on the large side, and there was a groan of disgust when she rolled over, legs akimbo, that was audible even over the frantic Korean camera shutters.

After washing our eyes out we went and watched the mens wrestling, which our friend Mike entered and subsequently won, beating a really quite large Korean man with a bodyslam that echoed around the world and through time itself. This instantly made him the hero of MudFest and throughout the night people who witnessed his victory rewarded him with hugs and high-fives. 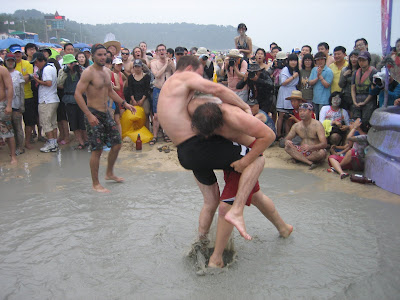 We headed further down the beach and met two (very drunk) Americans, who were dressed as Pirates, complete with little ships attached to their waists. Soon a fairly large wave hit, destroying their ships. One stood still, staring incredulously at the ocean, the other just collapsed in the surf crying, and started wailing about being “scuppered” and how he wasn’t a real pirate any more. I like to think that in their drunken haze, these two men legitimately thought they were pirates, and when I saw them dragging what was left of their little ships onto the beach a little while later I felt genuinely sorry for them.

At this point we were all coated head-to-toe in mud, and decided to go exploring. We found a stall giving out coloured powder, so we did what any group of slightly drunk foreigners would do and launched into a big coloured-powder fight, which quickly escalated as more people joined in, until the stall owner was shouting over the din for us all to stop, but to no avail. Once we were thoroughly coated in every colour of the rainbow, we left the carnage we had created and went down to the sea to clean off.

The day continued in much the same way – getting muddy, drinking, rinse, repeat. Once the sun went down the heavens opened, but nobody really cared as everybody was wet and muddy anyway, and we were treated to an absolutely spectacular fireworks display from our hiding place under a beach hut. 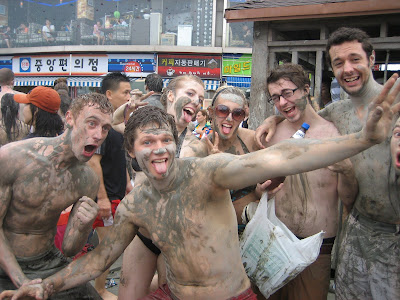 Frank, Ashley, Marissa, Ben, Me and Mike
The party went on late into the night, and we eventually found our way back to our motel room after a dawn swim for which I sacrificed my last set of dry clothes.

The next day I wandered down to the sea front which was the scene of so much chaos the day before, but the shoddy weather had driven away all but the most hardcore (read: drunk) mudfesters. We boarded a bus and headed back to Seoul, all slightly damp and incredibly tired.

Ordinarily I’m not sure MudFest would have been the place for me – especially around the wrestling area you could smell the testosterone, and drunk American GIs seem to be more trouble then they’re worth, but after so many weeks of cultural stuff like Ganghwa and Seoraksan it was nice to just get blind drunk with thousands of other people and not have to worry about offending Korean cultural mores (Although I feel fairly certain the conservative Korean press won’t hold off with the pictures of drunk westerners this week – hopefully they’ll spare that fat wrestling girl’s dignity though).