Now I’ll be the first to admit I’m not a happy commuter. Many people I know have had their revulsion dulled by years of appalling train services, long journey times and antisocial fellow travelers, but I’m not there yet. Small problems still enrage me, people behaving badly on trains maddens me, and of course the cost is ridiculous. I can’t just accept these things as par for the course. There must be a better way; there has to be.

The easiest way to improve the experience for everyone is for people to start behaving like reasonable humans towards each other. So, based on my own experiences, I’ve cobbled together some top tips to prevent enraging your fellow passengers, and to hopefully make the commute that little bit more bearable for us all.

1. Your bag doesn’t get its own seat

Much like air travel, you bought a ticket for one seat. Other passengers, similarly, have bought a ticket for one seat, should they be available. Your bag is not a person; it doesn’t get a seat. If the train is even remotely close to full, you need to move that shit onto the ground. Another tip – make sure you actually can move your bag should it be necessary. Don’t be this person –

Bonus shithead points if you actually have to be asked to move it. Way to respect your fellow traveler.

2. People come out of doors as well as go in them

We all know you’re in a passive-aggressive race with your fellow commuters to snag the remaining free seats when a train pulls in, but you know what’s not helping anyone? Standing right the fuck in front of the doors as they open. People have to get off before you get on, numbnuts, and getting in their way is helping no-one.

Fun fact: In Taipei, and many other cities, they have lines painted on the ground to make sure people wait to the side of the door when a train is arriving. See all these efficient Taiwanese people waiting patiently? Emulate them. 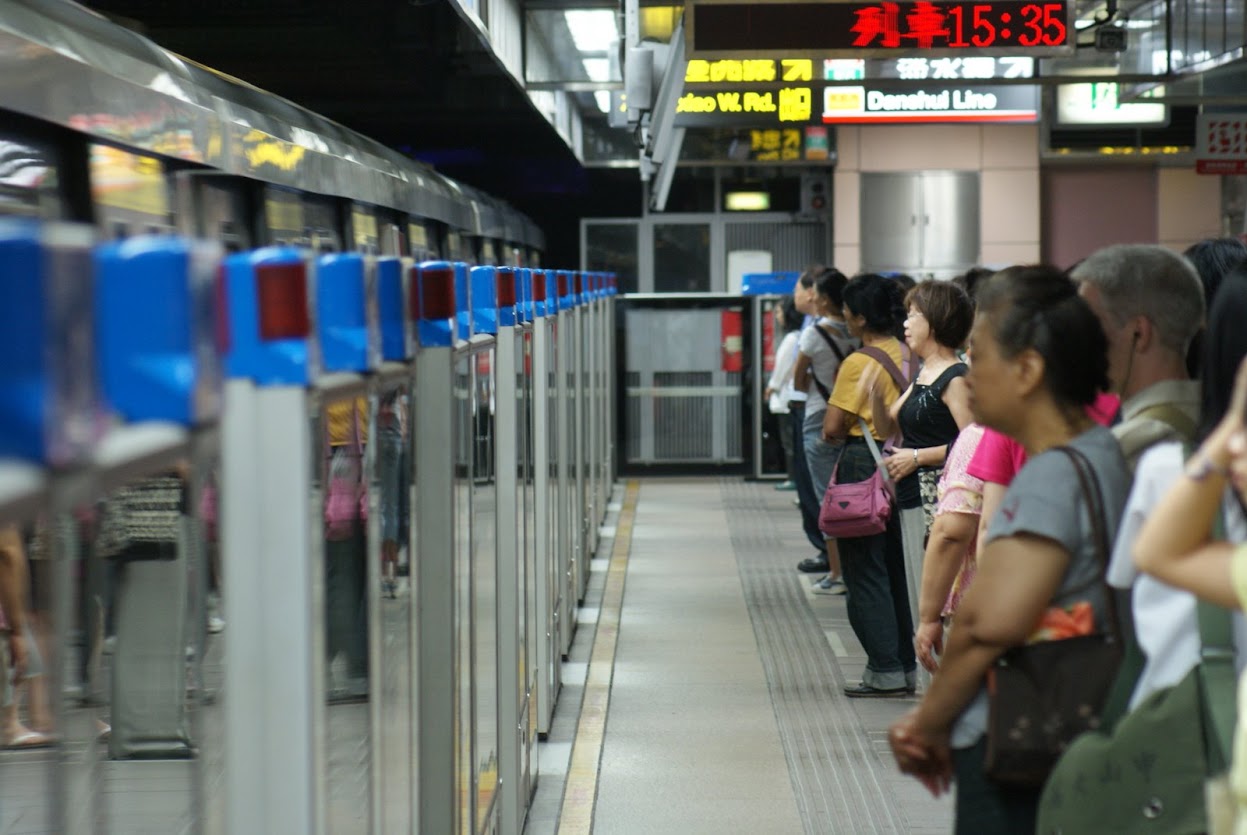 Just below bag-on-the-seat on the list of dick moves in the asshole commuter’s handbook is idling in the aisle seat. We all know it’s because you don’t want anyone to sit next to you, and you’re relying on British timidness to get yourself some extra space.

Well, we’re all in this together buddy, so you better shuffle over to the window and make room for your compatriots.

You would think, or at least hope, that people who took the same journey twice a day would know where the ticket barriers are. With this knowledge, making sure you have tickets at the ready for speedy passage of barriers is a piece of cake! Well, apparently not.

Pro-tip: Get your ticket out when you’re waiting for the train to pull into the station, that way you don’t have to fumble for it while negotiating crowds as you disembark.

5. Fuck you if you’re making noise

If I’m commuting I’m either tired and mainlining coffee to wake myself up, or tired and looking forward to getting off this train of cretins to go home and eat some nice dinner and enjoy a glass of wine. What will make my journey irreconcilably awful is having to listen to:

Bonus shithead points if I can hear whatever it is you’re doing over whatever I’m listening to on my headphones.

6. Pretending to be asleep doesn’t fool anyone

This is an advanced technique and quite often works; pretend to be asleep and people are less likely to bother you. This can be combined with 1 or 3 for powerful commuter double-assholery. Observe –

7. Get out of the goddamn way

We all know that if you stare really hard at a departure board it will mean your train is assigned a platform sooner, but don’t stand there like a bloody dairy cow taking up space and getting in everyone’s way. Look at all these half-wits –

If you’re working from your laptop on the train and someone sits opposite you, at least have the decency to do that ‘shuffle your stuff around’ thing where you don’t actually move anything, but you at least acknowledge the other party exists, and look as though you’re trying to be polite.

If you’re a Captain of Industry that needs a 17″ MacBook because no other laptop is large enough to contain your paradigm-busting Powerpoints, bear in mind what your neighbour opposite is looking at.

Bonus tip: Be excellent to each other

Just think about the people around you when commuting. If someone is struggling to get a pram off the train, help them rather than standing behind them rolling your eyes. If a lost looking soul asks you if they’re on the right train actually answer them instead of thinking your headphones give you a get-out-of-jail-free card to ignore the world around you.

Just to clear this up once and for all – furniture is not welcome on commuter trains.

7 thoughts on “Eight tips to avoid commuting like an asshole”